Information on Sambo/Sombo in Scotland and beyond

Sambo is an acronym for the Russian phrase “Self-Defence Without Weapons” (SAMozashchita Bez Oruzhiya).  Doing the research to write about the history about Sambo was not an easy task.  Going through several different texts, it seemed they all had different versions of dates and lack of information.  Some dates did not make sense.   Finally comparing these texts I was able to find some common grounds and questions I had.

The history of Sambo can go back before the Russian Revolution, back to the days of Imperial Russia. During Imperial Russia, there  was a Japanese Navy admiral, Hirose Takeo who was sent to Russia for studies while staying at the military attache in St. Petersburg. He was said to have taught at the Russian military officer school Judo/ self-defense. 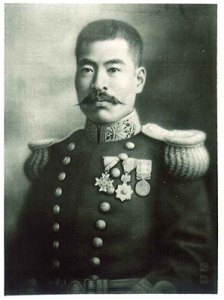 H.Takeo trained Judo at the Kodokan and earned his 4th Dan.  During his era, while training at the Kodokan, there still was influence from the Tenjin Shiunyo Ryu style of Japanese Ju-Jutsu, therefore practitioners also learned self-defense applications.  Due to his high skills in Judo/Ju-Jutsu, it is assumed that he taught the Russian officers and effective self-defense system.  H. Takeo returned to Japan in 1902.  He later died in 1904 a national hero during the Russo-Japanese War(1904-1905).

There is an other obscure person not mentioned often in the history of Sambo. This person was Ivan Vladimirovich Lebedev. I. Lebedev trained mainly in French Wrestling (what they called Greco-Roman Wrestling back then) and weightlifting. He was one of the few experts those days in Russia. 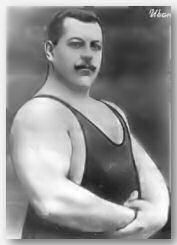 He developed the police self-defense system based on French Wrestling , Judo/Ju-Jutsu.  In his manual “Self-Defense and arrest” (1915) he selected 50 techniques of various hold escapes, strikes, knife and revolver defenses and escorting and arresting techniques.  His other combat manual was “French Wrestling”(1915), demonstrating Greco-Roman Wrestling techniques.

Throughout many Sambo historical documents, three people are named as founders of Sambo: V.Oshchepkov, V.Spiridonov and A.Kharlampiev.  Of the three V.Oshchepkov could be said as the real founder of Sambo.

Vasily Oshchepkov was born in 1893  on the Sakhalin Island, which is located north of Japan.  His parents died when he was 11 yrs old, and then was orphaned off.  This was the period of the Russo-Japanese War of 1904-05, and Japan occupied the southern part (and where he lived) of the Sakhalin Island. 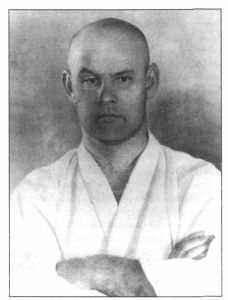 When the Russo-Japanese War was over, Oshchepkov, in 1908, was sent to Japan to attend the Russian Orthodox seminary mission located in Tokyo.  While in Tokyo, he received training to become a interpreter and also trained Judo ta the Kodokan.  In 1913, he earned his Nidan(2nd degree black belt).  From 1918 to 1926 he was an agent gathering intelligence for the Red Army about Japan. He was first posted in Vladivosktok in 1918, then in 1921 Northern Sakhalin Island.  From 1925-26 he was posted in Japan.

Upon return to Vladivostok in 1926, worked as an interpreter and Judo instructor.  Along with the collaboration with a Boxing and Savate specialist P. Azanchevsky, Oshchepkov was able to add the punches of boxing and kicks of Savate into the self-defense system he was creating.

Oshchepkov began promoting his system of self-defense for the need of  hand-to-hand combat training for the Red Army.  He started giving instruction throughout the sport clubs of Siberia and importantly in the Novosibirsk branch of the Dynamo sport society for  military students.

The military specialists were interested in his training methods, and in 1929 was transferred to Moscow to teach hand-to-hand combat to the CDKA (Sport Club of the Central House of the Red Army).  In 1931, he took part in writing a manual for the Red Army implementing hand-to-hand techniques including bayonet fighting, fighting with trench shovel, defending unarmed vs armed opponents.

To make his Judo system spread nationwide Oshchepkov needed to train more instructors. In 1931, was working for the State Central Institute of Physical Culture as head instructor of his Judo system.  There Oshchepkov was able to work along other teachers of Greco-Roman Wrestling, Boxing and Fencing and this was added to his combat system.

Oshchepkov, between 1931-33 was teaching Judo military police officers at the Central Higher School of Militia.  He looked at, through interviews, real conflicts the officers had with criminals to better adapt his combat system for the police.

Another person, who is said to be involved in the development of Sambo is Victor Spiridonov.  Born in 1883, he was a veteran of the Russo-Japanese War and WWI.  In 1923 he began to work  in the new sports society “Dynamo”, used by special agents and military officers.  He started to develop his own system of self-defense. 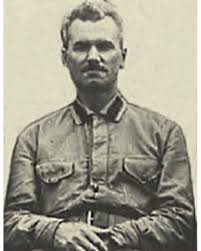 He based his system mainly on Ju-Jutsu and other Western combat arts (ex. Greco-Roman wrestling, Boxing).  As he never traveled to Japan, it is said that he didn’t learn Ju-Jitsu from any real instructor, rather from books along with testing out other techniques on his own.  His system was officially adopted by the Soviet security forces within the Dynamo.  He first used the word Ju-Jutsu in his system, then finally used Sambo as an abbreviation for “self-defense without weapons”.  He wrote 3 books, his first in 1927. Spridonov kept his system confidential to internal security officers.

Oshchepkov attempted to get better relationship with the Central Council Division of Self-Defense without Weapons headed by Spiridonov in the Dynamo.  Oshchepkov and Spiridonov’s students met for unofficial matches.  Unlike Spiridonovs’ pupils,  Oshchepkovs’ students competed in many more open competitions, and defeated easily Spiridonovs’ students.  Not wanting to acknowledge the flaws of his system, Spiridonov stopped all contact with Oshchepkov.  He claimed his system was “secret” and kept to internal security officers, and stopped doing external demonstrations.  Perhaps of jealousy, Spiridonov was able to eject Oshchepkov from all Dynamo contacts and the Central Higher School of Militia.

Oshchepkov subdivided his system into “Judo Combat Division” (combat) and “Judo Freestyle Wrestling” (sport) and was taught at the State Central Institute of Physical Culture.  The basis of his system was the Kodokan Judo techniques, but because of contact with students in Moscow from different nationalities, he included techniques from thees ethnic wrestling systems.  These systems included: Georgian Chidaoba, Armenian Koh, Azerbaijani Gulesh, Kazakh Kures, Uzbeki Kurash, Turkmeni Goresh, and Tajik Gushtingiri. With the wide participation of ethnic wrestling styles at Sambo competitions, it cultivated the techniques of Sambo.

Oshchepkov’s “Judo Combat Division” was a system especially designed for the use of the military.  This included such techniques of fighting unarmed vs an unarmed opponent and/or armed opponent in close distances.  It also included fighting at close quarters ,armed vs armed opponent.  The striking techniques were taken from Japanese traditional Ju-Jutsu, Boxing, Chinese Wushu and Savate.

In 1933, Oshchepkov published the first competition rules for his Judo system.  The Sambo uniform came to light.  A jacket of special design,shorts and soft leather shoes were introduced.

In 1937, a dark shadow came upon the development of Sambo.  Japan invaded China and the Soviet Union sent weapons and advisors to China.  The diplomatic relationship between Japan and USSR deteriorated.  Judo programs were removed from all institutes. Becuse of Oshchepkovís past history of living in Japan, he was charged for spying for Japan and arrested.  He died some days later in prison at the age of 44.

Although a repression on Oschepkov’s system, the Soviet state did not want to disestablish an invaluable combat sport and self-defense system.  In 1938, Oshchepkov’s former students took over the reign and held a conference.  There they decided that the creation of the Soviet Freestyle Wrestling system was proclaimed.  To protect themselves from the possibility of Stalin’s demented purges, and be politically correct, they declared that the Soviet Freestyle Wrestling was based on ethnic wrestling styles of the Soviet Union, and not that of Japanese Judo.

Oshchepkov’s students, headed by Anatoly Kharlampiev continued in honing the Soviet Red Army’s hand-to-hand combat system.  They published manuals for the military, which were used in World War Two.  Any further development was put on hold during the war. 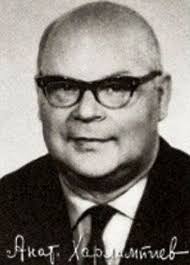 After the war, Kharlampiev in 1945 was assigned to the Defense Sport Department.  There he was chief instructor of hand-to-hand combat for the NKVD (People’s Commissariat for Internal Affairs).   Spiridonov died in 1943 at the age of 60.

In 1946, the All-USSR Committee of Physical Culture and Sports officially recognized “Sambo Free Wrestling”. Competitions resume in 1947 and in 1948 Sambo wrestling  acquired its current name.

During the late 1940s and early 1950s, the division of sport and combat Sambo was made. Combat Sambo was restricted to the military, internal security forces and law enforcement.  The rest of the population trained in Sport Sambo.

During this period, Kharlampiev had a big role in the transmission of sport and combat Sambo. Several manuals were published by him.  Kharlampiev was portrayed as the ìcreatorî of Sambo through press articles and even films, by traveling throughout the Soviet Union learning techniques from ethnic wrestling systems.  This was a Soviet propaganda plan to distance the truth that Samboís fundamentals that came from Japanese Judo/Ju-Jutsu. Kharlampiev never proclaimed in his manuals  that he was the creator, but never denounced it either.

In 1984, the creation of FIAS (International Amateur Sambo Federation), separating from FILA.  In 2001, the first World Combat Sambo Championships started.